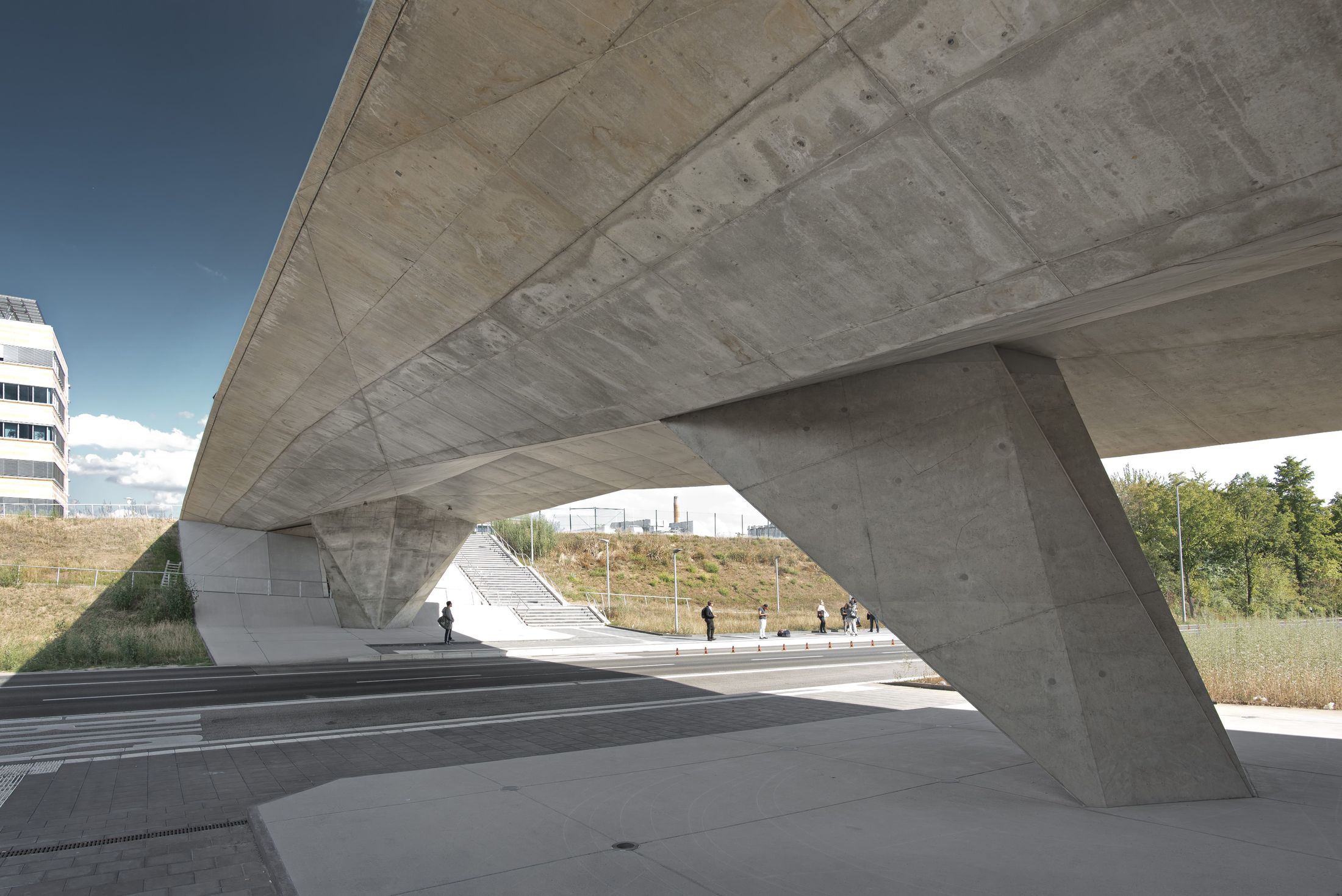 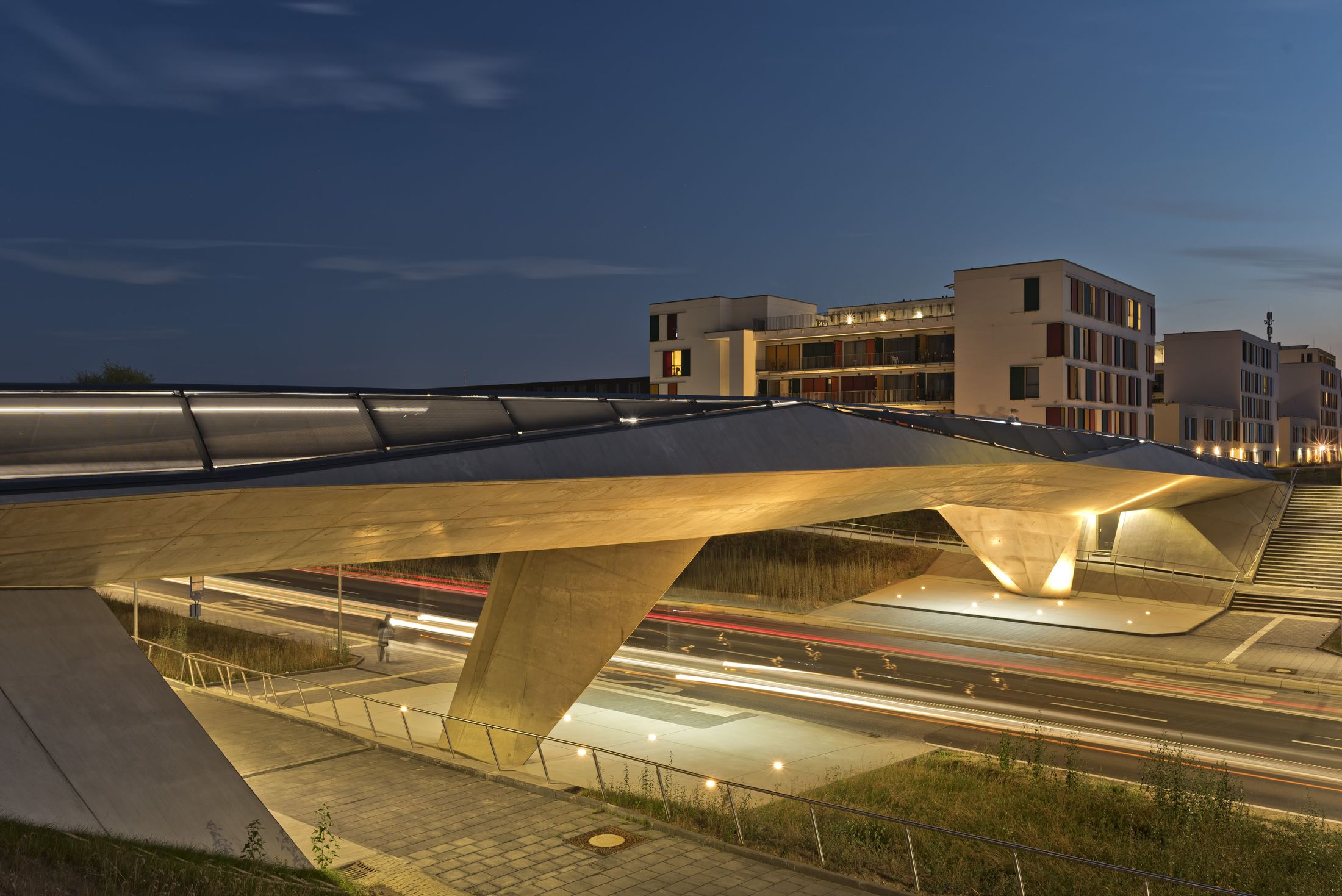 Bridge over the Koblenzer Strasse in Mainz

The bridge over the Koblenzer Strasse is a major component in the "stadium and campus expansion" traffic concept. In order to continue using the university campus as a parking area during Bundesliga matches, an attractive pedestrian connection to the stadium is to be built. In addition, the bridge connects the new and old university campuses, fostering communication between the two university sites. For this purpose, the overpass not only caters for pedestrians and cyclists but is also a bus route on the campus line.

Since the structure has a very high-profile location and also represents the first entrance for many visitors to the city of Mainz, a competition was held in 2008 in the form of a design expertise. The consortium of Schüßler-Plan and schneider+schumacher emerged as competition winners.

In addition to the traffic requirements, the terms of reference also referred to the inclusion of a throw protection. As the bridge is used by up to 12,000 people on Bundesliga match days, proposals were to be considered to protect traffic moving under the bridge. In addition, a lighting concept was to be developed to set the scene for both the promenade and the bridge at night. To meet this requirement, a cross-sectional form was first developed in collaboration with the architects to keep the railing far away from the outer edge of the bridge by means of inclined parapets.

The horizontal distance of 1.50 m between the handrail and the outer edge of the bridge creates a visual distance to the road below. This significantly reduces the danger that objects can be deliberately thrown from the bridge onto moving cars. The parapets consist of triangular concrete panels on which steel railings with perforated steel sheets are placed. A light band integrated into the canopy effectively lights up the structure. The concept of the inclined parapets was transformed into a folded cross-section which is systematically repeated in the longitudinal continuation of the bridge.

The bridge superstructure was designed as a three-span slab beam made of prestressed concrete with variable structural heights. The spans are 15.0 m - 25.8 m - 15.0 m and the total span is 55.8 m. The two central supports consist of reinforced concrete slabs that are monolithically attached to the superstructure. Bearings were only placed on the high abutments to ensure longitudinal expansion.

The straight connection between these high and low points creates the characteristic bottom view of the bridge in the form of folded triangular surfaces. The bridge was completed in August 2015. In 2017, it was awarded the "International Architecture Award 2017" by The Chicago Athenaeum and the European Centre for Architecture, Art, Design and Urban Studies. 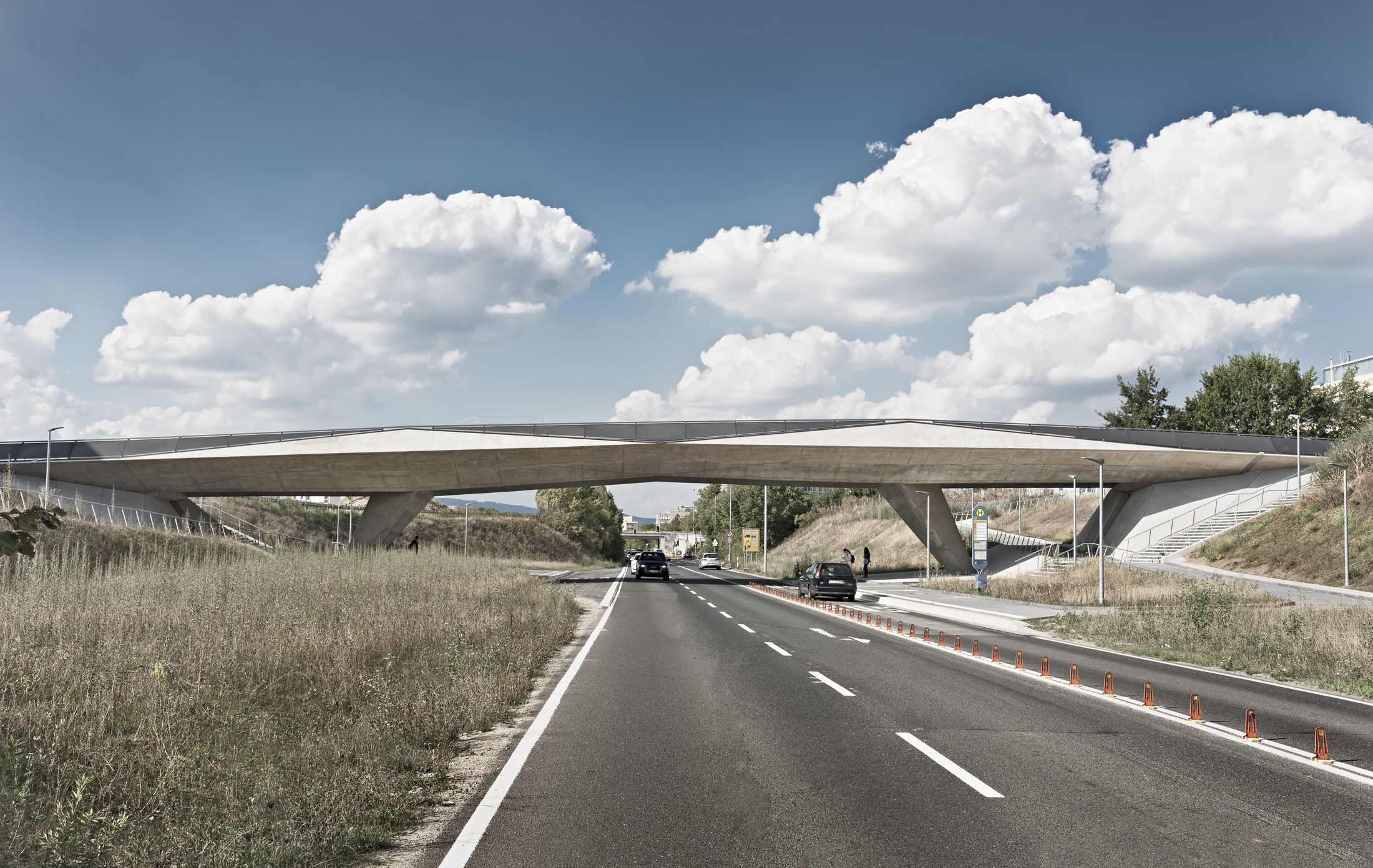